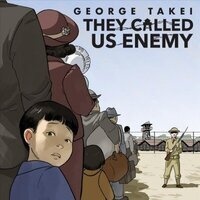 They Called Us Enemy - Book Club

"'Shame is a cruel thing,' writes George Takei in They Called Us Enemy, his new graphic novel about his childhood years in an American concentration camp during World War II. 'It should rest on the perpetrators, but they don't carry it the way the victims do'.

This irony becomes most evident at the conclusion of Takei's book, where he depicts the U.S. government's tardy attempts to establish a sense of collective shame about America's wartime internment of Japanese Americans. 'Here we admit a wrong: Here we reaffirm our commitment as a nation to equal justice under law,' President Reagan is shown saying in 1988. But no matter how polished his words — or how many zeros on the restitution check Takei receives in 1991 — such attempts at official remorse ring hollow. What the government did to Takei and some 120,000 other Japanese Americans can't be undone, no matter how many speeches public officials deliver or how many checks they send"